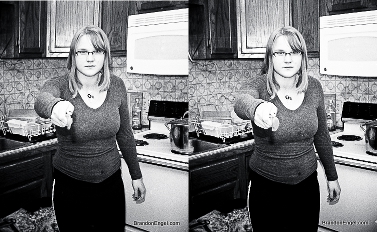 Get a little ways back from your monitor and cross your eyes.

Ah, she has a knife and knows how to use it!

So here is a quick example of a couple pictures I made with my new Nishika N8000. I got the idea from this little wiggle stereoscopy post. I think it came out alright and it’s the best thing I can do without making you wear silly glasses. The key seems to be to get the image flipping between frames at 75 milliseconds.  I did this in Gimp it wasn’t as straight forward as I’d hoped but it was fairly easy once you get the hang of it.

It was fun to play around with but to really get the full effect you need to space out your images properly. What you’re shooting for is the width of your eyes. The camera these were taken only had maybe a half inch space at most between the four separate lenses.